In January, CUPE 411 filed a Human Rights Complaint (HRC) against Trustee Barry Neufeld, the School Board and the School District for the public comments that Trustee Neufeld has made about Gender Identity and Sexual Orientation and the effects on our LGBTQ+ members and members who are parents of LGBTQ+ students. The BCTF has now filed a similar complaint.

As a union we believe in equality and human rights protections and will always fight for both. We are legally and ethically obligated to ensure that the employer is meeting their lawful responsibility to provide a workplace free from discrimination. Solidarity is our strength. When one of us is harmed, we are all harmed and CUPE 411 stands strong with our LGBTQ+ members and members who are parents of LGBTQ+ children.

This is a representative complaint on behalf of a group. Individual members names are not attached to this complaint. However, individual members are entitled to their own opinions and have the option to personally opt-out of the Human Rights Complaint. If you have reviewed the information about the Human Rights Complaint, but would like to personally opt-out, please forward your full name and contact information to the union. Your name will be kept confidential.

This morning the CUPE 411 Executive Board hosted a Special Information Session on the Human Rights Complaint filed against Trustee Barry Neufeld and the Chilliwack School Board of Trustees. A representative from our legal team and CUPE’s representative on Human Rights presented to the membership on the hows and whys and what happens nexts for the strong action taken by our local on this issue. It was a well done and informative presentation.

Thank you to everyone who came out this morning. It was wonderful to have so many thoughtful and intelligent questions asked and to have almost universal group participation in the discussion.

We have been overwhelmed by the support from members, our Minister of Education Rob Flemming, other CUPE locals, the CTA and BCTF, parents in our community and other unions in BC and of course CUPE BC and CUPE National – all in appreciation of CUPE 411 sending a clear message that we will defend and protect the Human Rights of workers. I am so proud of CUPE 411.

Click here for a PDF copy of the Power Point Presentation 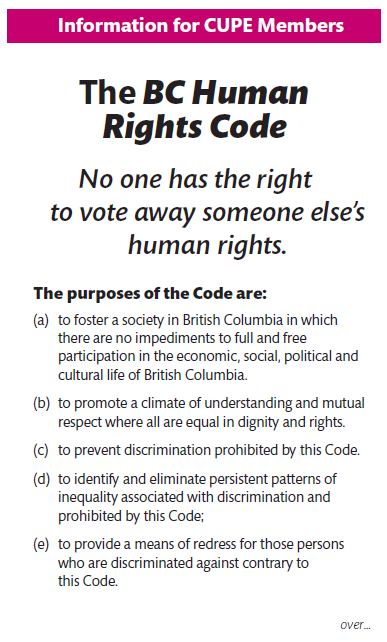 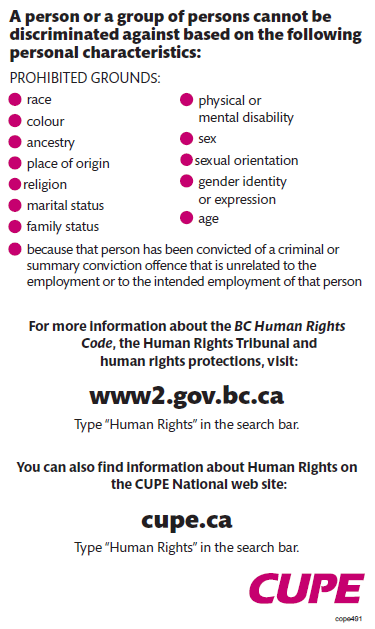 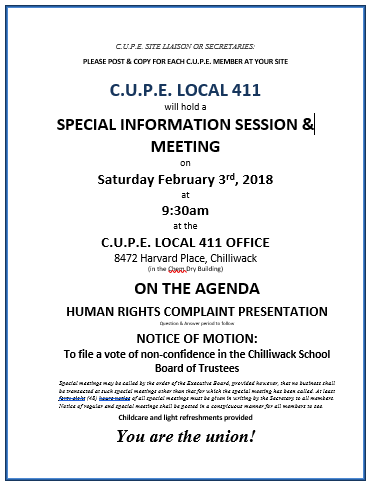 While your union’s intent was to present the Human Rights Complaint to the membership prior to the complaint being filed and we are upset that the media announced the filing prior to our Regular General Meeting on Saturday January 20th, 2018, this is not an item that would have gone to a vote of the General Membership.

Your CUPE 411 President and Executive Board have been elected to run the business of the union and ensure that our members’ Human Rights, Provincial & Federal Labour Law, and Collective Agreement are not violated.  When we learn of violations, we do not come to the membership to ask whether we should act; it is our legal and ethical obligation to do so.

Your union is working with CUPE National, CUPE BC and the legal team to put together an information session for our members about this process and which will address our members’ questions and concerns, as well as bring a greater understanding about the obligations of the union and why CUPE 411 filed this Human Rights Complaint.

CUPE 411 union dues are not funding the legal representation for this Human Rights Complaint.

We realize that not every member will agree with the Human Rights complaint, and that is OK.  Every member has a right to their opinion about Gender Identity, about Sexual Orientation and about Trustee Neufeld.

However, as a union we believe in equality and human rights protections and will always fight for both. Furthermore, we are legally and ethically obligated to ensure that the employer is meeting their lawful responsibility to provide a workplace free from discrimination.

When Trustee Neufeld, in his position of authority as a School District Trustee, made – and continues to make – discriminatory comments about Gender Identity and Sexual Orientation it creates an unsafe work environment for our LGBTQ+ members. Union communications to the employer, to the Board of Trustees and to Trustee Neufeld himself about Trustee Neufeld’s comments and requests to the district to ensure our LGBTQ+ members feel safe and included in our workplaces have been ignored. Discrimination based on Gender Identity and Sexual Orientation is illegal in the Human Rights Code. By filing a Human Rights complaint, we are fulfilling our duty as a union and sending a clear message to Trustee Neufeld and the employer that CUPE 411 members’ human rights can not be violated.

Additionally, our members may assist students with assignments which have components or materials taken from the SOGI 123 Resource.  Trustee Neufeld vehemently opposes the use of Ministry of Education approved SOGI 123 resources.  Our members need to feel safe to do their jobs as directed free from the threat of accusations, scrutiny or public social media posts about their work by a School Board Trustee.

Finally, as the Chilliwack School District Education Support Workers, everything we do works towards creating an environment for students that is operational, safe and inclusive. We are the support of this school district. Trustee Neufeld’s comments have created an unsafe environment for LGBTQ+ students. We stand in support of all our students, regardless of gender identity or sexual orientation.

The local is not paying for any of the legal costs associated with the complaint, there is no financial cost to our membership.

If you have any questions or concerns, please do not hesitate to contact CUPE 411 President, Shana Kirkland, at president@cupe411.ca or 604.392.1411

There are no upcoming events.